With Enso being a functional language, it is crucial for function calls to be efficient and easily inlined. At the same time, the logic of calling functions is involved – there’s a plethora of features this system needs to support, making the functions the most involved and somewhat convoluted part of the interpreter’s design.

The following is an overview of the logic, outlining the most important features supported by this system and a diagram of how they fit into the Truffle framework.

It is very important for Enso to perform TCO well, since there are no intrinsic looping constructs in the language.

The idea behind Enso’s TCO is simple, even if the implementation is confusing. Whenever we call a possibly-tail-recursive function in a tail position, a tail call exception containing the function and its arguments is thrown. This exception is then caught in a loop, effectively translating recursion into a loop. With the use of Truffle’s ControlFlowException, this code is optimized like a builtin language loop construct.

This logic is encapsulated in the various subclasses of CallOptimiserNode.

While certainly useful for the user, it requires some non-trivial facilitation in the interpreter. An easy solution, would be to simply pass arguments in a dictionary-like structure (e.g. a HashMap), but that has unacceptable performance characteristics.

Therefore, the approach of choice is to compute and cache a translation table – a recipe for reordering arguments for a given function at a given call site.

This mapping is then memoized and used to efficiently reorder arguments on each execution, without the need to employ any more involved data structures. A standard Truffle Polymorphic Inline Cache is used to store these mappings, therefore it may be subject to the standard problems – storing rarely accessed paths in the cache, as well as cache misses for highly polymorphic call sites.

This logic is encapsulated in the ArgumentSorterNode.

Enso allows functions to define certain arguments as Suspended, so that when these are passed to a function, the corresponding expressions are not evaluated at the call site, but are instead passed to the function as closures for evaluation at the function’s discretion.

Therefore, all application arguments are actually treated as thunks and only evaluated at call-site when the function signature defines them as eager.

Argument execution is happening inside the ArgumentSorterNode.

Functions can also be applied partially (i.e. with less arguments than required by the signature, in which case the result is a function with certain arguments fixed) or over-saturated (i.e. if a function returns another function, in which case arguments for 2 consecutive calls can be passed in a single application expression).

This logic is handled inside the CurryNode.

Functions can be dispatched dynamically, meaning a name can denote different functions, based on the (runtime) type of the first argument.

This logic is fairly straightforward. It is triggered from InvokeCallableNode and performed (with caching) in the MethodResolverNode.

As we want to provide a consistent semantics in the language (especially with the use of multi-argument lambdas internally), there is one specific situation that arises when handling applications with default arguments. As we expect a returned lambda to be applied to any additional arguments (in keeping with currying), a returned lambda that is otherwise fully saturated (by default arguments) should also be executed.

To this end, we make sure that the callsite checks if the return value from a function is a function, and if it is fully saturated with defaults it will call it.

In certain situations, such as call sites calling a lot of different functions without splitting or intensive use of the same instance of the interop library, caching intermediate information about the call-site becomes impossible. For such cases, we use nodes with names starting with Indirect to perform the required operation. These nodes do not perform any caching and instead use the most general version of the logic possible for every call. These nodes also support the uncached mode of operation, which means the node itself may be used without adopting them, using a global singleton instance instead. As such the indirect nodes are very slow and should only be used after it is discovered that the call site cannot afford more specific operations anymore. The uncached version of these nodes is even slower, as no inlining can happen on sites using them. This should be used with care, only when large call overhead is acceptable (e.g. rarely-used instances of the interop library).

The following diagram summarizes all the nodes participating in a function call. The entry points to this system are ApplicationNode (for in-language function calls) and InteropLibrary<Function> (for polyglot function calls). 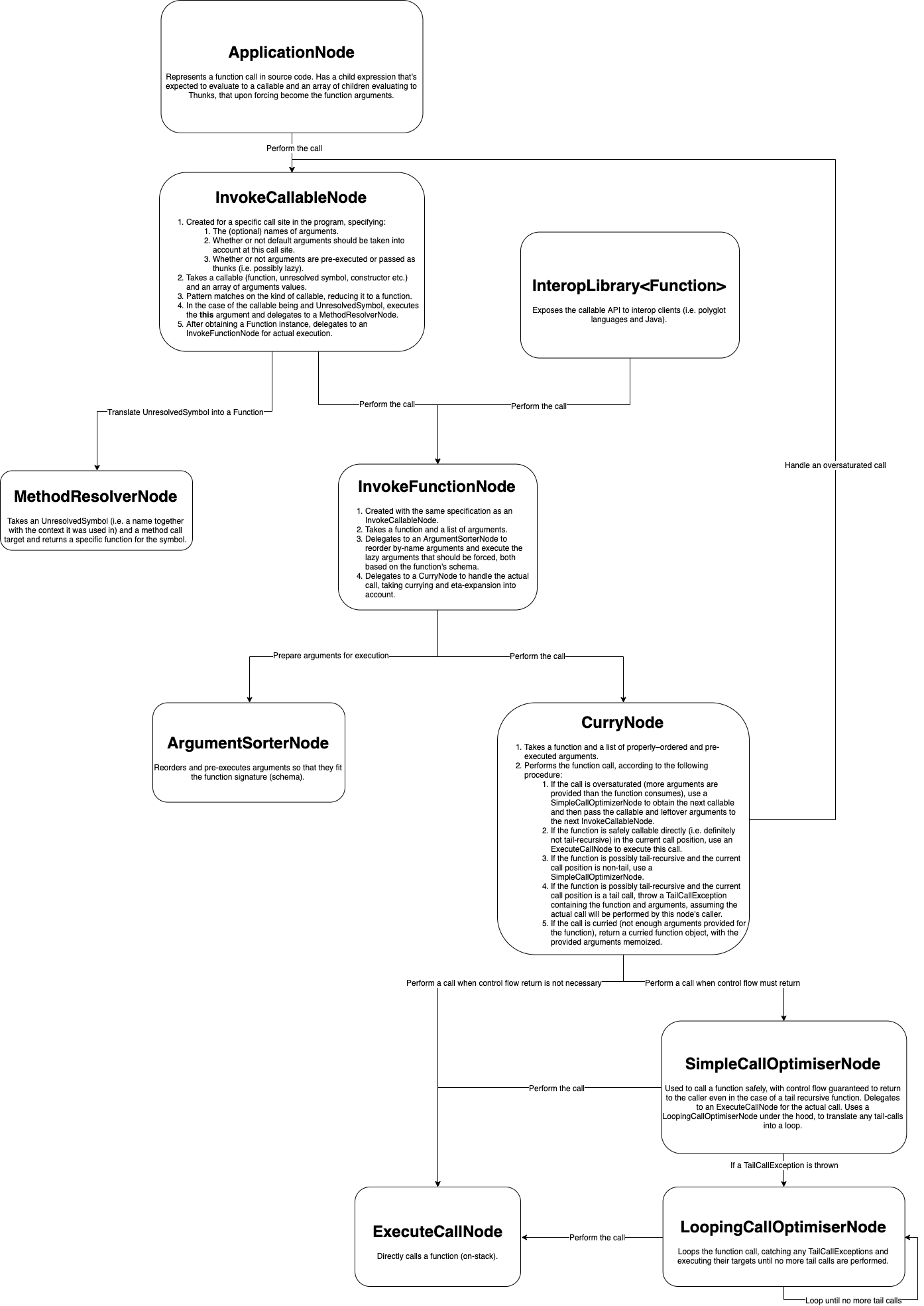